Don Saladino has been training movie stars for twenty-five years. Ryan Reynolds, Emily Blunt, Hugh Jackman and Jake Gyllenhaal are among his big black book of his A-list clientele. From the buff to the emaciated, each actor enters his studio with different physical requirements in accordance with the character they’re set to become. Interestingly, the visual outcome is not the driving force behind the protocols adopted by the world-class PT.

“When people hear the word ‘transformation’, they usually think about bringing about a positive change. With movie stars, that’s not always the case.

“I’ve prepped hundreds of people for Hollywood roles, and no two have been the same,” says Dom. “There are always similar principles I carry from one individual to the other, but not every client comes to me asking for abs.

“Liev Schreiber came to me to prep for his role in the movie Chuck and he needed to become a boxer. Getting him any leaner would’ve been counterproductive for that particular role. The same applied to Dave Harbour for Hellboy and Drew Powell who portrayed Solomon Grundy in Gotham.

“I also worked with Joaquin Phoenix for a movie in which he had to get as thin as possible. Initially, I jump on a video call and ask them to pull up pictures comparable to the physical outcome they’re envisioning. I’m then able to put the plan together.”

Regardless of the task in hand, Don seeks to ensure each Hollywood transformation is carried out in a way that’s kind to the body. “No matter what happens, I’m always searching for a high level of food quality,” he says. “Even when we must put body fat on, I still want healthier foods in my client’s diets. Remove the junk foods whilst still increasing their caloric intake, pushing them into a surplus. This can apply to anyone who wants to gain weight. Just because you’re putting body fat on, doesn’t mean it has to come from unhealthy calories.

“Movement quality is another common denominator regardless of goals. I want them to move better. I want their bodies to become more resilient and withstand that sixteen-hour shoot day. I want to keep energy levels high.”

When it comes to women, Don says the goal is always to pack on lean muscle, no matter what.

“Whether it’s Scarlett Johansson, Blake Lively, Anne Hathaway, Cindy Crawford, any of my female clients, we’re always trying to put on muscle,” he says. “It doesn’t mean getting bigger. If I’m to take a female celebrity into a project and we are to eliminate two pounds of fat and put on two pounds of muscle, they’re still the same weight. Rarely do I want to merely strip someone of muscle mass, unless the role requires them to become completely undernourished in appearance.

“A frequent scenario is one in which an individual comes to me who’s been consuming just 800 calories per day. No matter what their physical goal, I can’t continue to remove calories. Calories are energy. It’s usually a case of increasing physical output and improving their micro and macronutrient intake.

“There have been occasions in which actors have come to me and they’re like, ‘I have to lose thirty pounds in a month’. I won’t implement irresponsible regimes. I’d rather them go to someone else. I’ve had high-profile people come to me asking me about specific areas that I do not play around with. I tell them, ‘I’m not the person you should be asking about this’, and I leave it at that. I don’t care what name in Hollywood it is.”

“The largest amount of weight I’ve ever helped a client to lose is over 500 pounds,” says Don. “That was a pretty big body transformation, which took around six years. We literally had to reteach the lady how to walk. I was coordinating with her doctors and we took things slowly to make sure she’d keep it off. I’m still working with this client and we’re going to get her weight down to under 200 pounds. It involves an entire team of doctors. It’s a very delicate process.”

You don’t have to be a Hollywood star to benefit from Don’s expertise. His remote training methods enable him to successfully mentor thousands of clients every single day.

“The transformations from my online programs have been astonishing,” says Don. “Sure, it’s great working with celebs, but it’s just as much fun seeing the mental changes that come about from that guy up the street who waddled when he walked and now runs past your door every morning with a huge smile on his face. It’s great to be a part of that. That’s what coaching is all about. You’ve got to find that emotional trigger and figure out what motivates that individual. It’s easy to create a great diet or fitness program, but it’s not always about giving someone ‘the best plan’. You have to assess what they’ve tried in the past. When you’re dealing with people who struggle to stay consistent, you need to begin with a minimalistic approach.

“I had a friend come to me recently saying, ‘I’ve got a weird request. I’m 45, and I just want to see my top two abs’. We eliminated 50-60% of the garbage and when he came back in three weeks later, you actually could see the definition in his upper-abs. ‘Dude, this is unbelievable, I can’t believe this. I thought I’d have to give everything up’, he said.

“That was a prime example of taking on someone who said they couldn’t stay motivated their entire life and giving them a minimalistic approach that worked. He went on to carve out a full six-pack and hasn’t stopped since.

“To avoid silly mistakes that can cost you dearly, you have to start journaling,” says Don. “People say to me, ‘I eat so good’, so I say, ‘Great, do me a favor and keep a five-day journal’. They’re like, ‘Okay, I can do that’.

“We go through the notes and start circling things and nine times out of ten, I can immediately see the problem. They’ve usually had two pieces of pizza here and some ice cream there. One evening, they maybe had a bag of Doritos and cleared up their kids’ chicken fingers. Identifying those surplus calories you probably didn’t even realize you were consuming can eliminate half the crap before you even get to the ‘diet plan’ part.

“I just launched an elimination diet as part of one of my challenges. It’s a four-week program, with a two-week detox. Elimination is something that works for everyone- no matter what your shape or goal.”

1- Prep your meals in advance 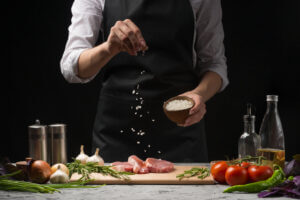 “Prepping meals in advance is a great way to stay on track with your health goals,” he says. “I prepare my meals on Wednesdays and Sundays and 90% of the meals I eat are from my meal prep. Some example meals are flank steak tacos and turkey chili.” 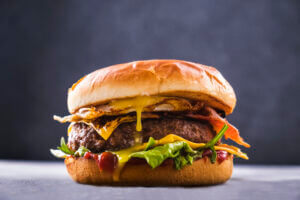 “It’s important to build consistency, but you are allowed one cheat meal a week,” he says.

3- Drink half your body weight in water 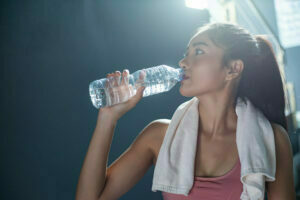 “Hydration is essential in maintaining focus and optimizing your metabolism,” says Don. “You need to be aiming to get half your body weight in ounces in water every day. So, if you weigh 100lbs, you need to be drinking 50 ounces of water per day.”

“Adding a HALO Hydration powder stick to your water will ensure your body is able to fully absorb the liquid you take in and will replenish the lost electrolytes, vitamins and minerals that your body

HALO is available on Amazon.com