From Punjab to Palace

Like all the truly profound success stories, Birmingham-born property tycoon Paul Bassi CBE stemmed from humble beginnings as a second-generation Sikh immigrant. Instilled with a relentless work ethic, he laid the foundations for attaining a £300 million property portfolio, Brick by Brick.

“In two generations, my family story has evolved from Punjabi immigrants arriving with almost nothing to being honored among the great and good at a royal palace” starts Paul. His cool air of confidence exudes a modest self-assurance.

“Everything in my life has ultimately followed from my grandfather’s decision to get on a plane and leave his homeland behind, in search of prosperity for his family: his big picture.

“It wasn’t easy being Asian in the sixties, seventies and eighties” he confesses, “there was no escaping racism, I was one of the few non-white faces in my school, but I was a tough street kid. In those years you would have been forgiven for thinking your middle name was ‘Paki’.

“For years, our parents had kept their heads down and put up quietly with all the racism and abuse. As the second generation came of age, the collective feeling was clear: that a line had to be drawn.” 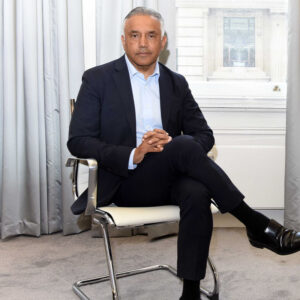 Despite being subjected to hardships that no one should have to endure, fundamentally it was Paul’s Sikh values that cemented both the hard work ethic and desire to give back, that ultimately paved the way for his astonishing success.

“Every penny was counted when I was growing up,” he says. “I learned there’s no replacement for hard work. When I started working, I was hungrier than everyone else, I got into work earlier.”

“In two generations, my family story has evolved from Punjabi immigrants arriving with almost nothing, to being HONORED among the great and good at a royal palace”

Paul found regardless of the size of deals he was starting to acquire, the formula remained the same and his portfolio soon grew exponentially to include care homes, bridging companies, restaurants, and a flourishing auction house.

“Don’t put all your eggs in one basket” he muses wisely. “It’s important to have multiple income streams so that when circumstances like the pandemic arise, you are protected through being diversified.”

Paul fondly remembers the day he received a CBE from Prince Charles as a “surreal, unforgettable and humbling experience”. The accolade serves as a true testament to the generous work he actively engages in to give back through his philanthropic ventures.

“Nobody really wants money, but the freedom money allows you”

Eager to soak up some of Paul’s infectious tenacity, I quiz him for parting tips for readers to level up. “If you want to know your future, look around at your friends” he replies cannily. “Aspire to hang around with people who bring more and more sophisticated opportunities.

“Success is very relative” he ponders. “No man is a success unto his wealth. Nobody really wants money, but the freedom money allows you. Find your ‘why’, the big picture; don’t aim for somebody else’s goal and remember to share your cake and reward those around you.”
Paul describes penning his bestselling book as “a rewarding journey”. It documents his spiraling rise to fortune with judicious flair, plus a healthy dose of inspiration, naturally. ‘Brick by Brick’ is available to purchase on Amazon and true to his benevolent form, all profits are donated to The Bond Wolfe Charitable Trust.

For more inspiration for turning real estate to a real fortune, lay your eyes on Anthony Lolli’s spectacular success story.