Your Trash Is His Treasure

He started out stealing shopping trolleys and now sells them to Banksy for nine grand! Chatting from his shipping container home on the River Ouse, Max McMurdo dished out some serious renovation inspiration. His penchant for upcycling has carved him out a rather impressive media career and if there was a care for the community award, Max would top anyone’s list.

“When I was a kid, we didn’t have PlayStations,” says Max. “There were only four TV channels, so I chose to make things for fun instead. My poor mom, she’d keep cereal in bags and washing up liquid in mugs because I’d steal the packaging to make things.

“I was always encouraged by my parents. They took me to art classes, to rugby, to all these wonderful things. Their support enabled me and encouraged me to go wild and do whatever I wanted. 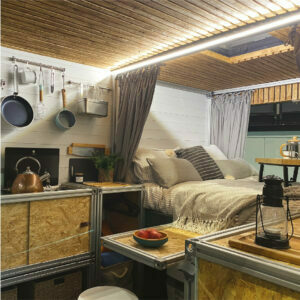 “When I finished studying, I became a car designer in Cologne. I thought all my dreams had come true. I love designing, I love cars, ‘cha-ching, easy life.’ But it was so dull, there were thousands of people designing one car, so I didn’t really have an input. I phoned my parents and said, ‘I’m quitting, but don’t worry, I’ve got a plan. I’m going to start my own company designing stuff out of junk.’ That was literally my plan.

“I bought an old 1972 Volkswagen campervan called Betty with every penny I had. I gave up everything and returned to my parent’s house to live on their drive in Betty. I refused to go inside and sponge off them. I said, ‘I’ll live in Betty on the drive, I don’t need anything’. But every mealtime I’d go in. All my washing was done. So basically, Betty was a bed in a box, but I was determined. I set about designing and making things out of rubbish. I wanted to show people you can be eco-friendly and compassionate without tying yourself to a tree. At the time, you either worked in the city, wore a suit, drove a Ferrari and were a bit of an idiot, or you were swampy, and you tied yourself to trees and had dirty fingernails and dreadlocks. There was no common sense ‘let’s just look after the planet’ kind of a meet in the middle zone. So that was my ambition. 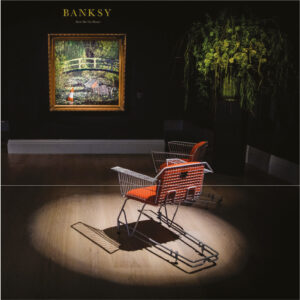 “I took a shopping trolley out of the supermarket car park without permission and turned it into a chair and thought ‘there’s got to be something in this.’ I knew it was beautiful, but I had no idea about money and the business side of things. I made shopping trolley chairs and bathtub sofas and washing machine drum tables, but I didn’t know how to sell them or who to sell them to. My girlfriend at the time was getting sick and tired of me just spending all my time down in the garage, so she applied for me to go on the TV show Dragon’s Den. I was so naive. The pitch was two hours long and they battered me. But in the end, Debra and Theo invested fifty grand.

“I spent it in thirty days, on moving premises, getting work vans, insurance, all the things I didn’t have. And luckily, the business took off. I was lucky in that when the media gets involved, you have bigger budgets to do bigger, sillier things. Ordinarily, even the most talented upcyclers struggle because of budget constraints, so they end up just painting tables and chairs.

“I bought an old 1972 Volkswagen campervan called Betty with every penny I had. I gave up everything and returned to my parent’s house to live on their drive in Betty”

“Ever since Dragon’s Den, my work has just evolved and grown into this wonderful monster that’s completely out of control.” Max loves to give back to the community as well as show his love for pre-used items. Thankfully, his media success has served as a welcome financial launchpad for injecting cash where it’s needed most.

“The guy who lives on the boat behind me had mental health issues and as a result, he had to go into sheltered accommodation,” says Max. “I saw him looking sad and had a chat and he said, ‘Look, a bloke’s coming today to take my boat off me for five hundred quid.’ ‘No, he’s not, don’t be daft,’ I said. It’s a battered old narrowboat and there was no chance I was letting them take it. I got together with a mate, we evicted the bully trying to take the boat, gave my neighbor two grand for it, and put him into a new home. We ended up with this narrowboat that we didn’t want, so we’re going to take it out of the water and turn it into a social space for people who are struggling. If anyone in the local area really is in need, they’ll be able to use the boat for free, borrow it, get some headspace and see nature. We’re going to completely renovate it. It’s going to have a beautiful big glass ceiling and an open plan kitchen.” 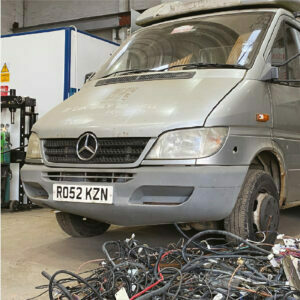 Max’s latest project saw him turn a twenty-year-old ambulance into the coolest camper we’ve ever laid eyes on.

“If you’re in the market for a campervan, you’ve got two choices,” he says. “You could buy a tiny little Volkswagen van that looks cool and hippy, but you can’t stand up in it. You can’t lay out in it properly, you can’t put a wetsuit on it, it’s highly impractical, but you can go through a drive-through and park in a car parking space! Or you could buy a massive seventy grand white plastic ugly thing, that’s full of beige upholstery and fake wood. They’ll tell you it’s the latest model and yet it has a massive aerial on the roof, and it’s really dated. Needless to say, I’ve never bought a campervan, despite my sense of adventure.

“I was chatting to my brother and he said, ‘Oh, my mate’s selling an ambulance.’ It was only fifteen hundred quid, so I said, ‘It’s lockdown. I love it. I don’t care.’ I bought it blind, then realized it was full of hospital stuff like stretchers and gunk”

“At the start of lockdown, I had a bit more time on my hands and I started thinking about creating pods that clip together. One’s got a cooker and a sink, one’s got a toilet, one’s got a shower, one’s got a fridge. There is even a box containing a pizza oven! I’ve got a pizza on a pod. They’re the coolest creations ever and I needed a home for them. I was chatting to my brother and he said, ‘Oh, my mate’s selling an ambulance.’ It was only fifteen hundred quid, so I said, ‘It’s lockdown. I love it. I don’t care.’ I bought it blind, then realized it was full of hospital stuff like stretchers and gunk. Twenty years of being an ambulance creates a lot of gunk! By that point I’d committed, so I set about the conversion. I wanted a full-size double bed, space for my surfboards, and a full-size shower. I also wanted it to be solar-powered. I didn’t want to be using diesel heaters or gas heating. It took six months from start to finish, and half of that time was consumed gutting the inside. It contained so many oxygen tubes and wires, it was unbelievable! The floors and ceilings were disgusting, and everything was glued.

“I took a shopping trolley out of the supermarket car park without permission and turned it into a chair and thought ‘there’s got to be something in this.’”

“It’s finished now and it’s ultra-modern and cool. There’s so much technology out there that none of the campers or caravans are using. I’ve upset a lot of manufacturers by producing something so hi-tech that’s environmentally friendly. I’m constantly being asked if it’s for sale! Including the cost of the vehicle, the project ended up costing £9,500 which isn’t bad at all! I pride myself on choosing affordable things. Hopefully, it’s inspiring for people to learn how they can go into their garage, grab an old pallet and make something for their home that’s both affordable and good for their mental health. There are so many benefits to upcycling.” 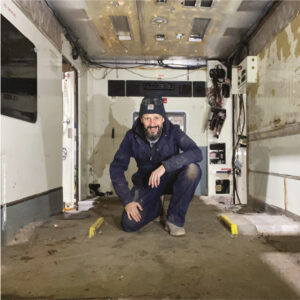 Not everything Max touches can be bought with pocket change though!

“I received an unexpected email from Sotheby’s. They said, ‘A very prestigious client of ours would like to purchase three shopping trolley chairs.’ Turns out it was Banksy”

“The highlight of my career came last year, when I received an unexpected email from Sotheby’s,” he says. “They said, ‘A very prestigious client of ours would like to purchase three shopping trolley chairs.’ I said, ‘Yeah, no problem. Would you like to rent them or buy them?’ And they said, ‘We don’t mind either way, it’s for an exhibition that’s coming up.’ They gave me the colorways and they had to be a very specific color. I thought, ‘This is very precise, it must be for an artist.’ Turns out it was Banksy, he was selling his famous piece ‘Show Me the Monet’. Banksy took Monet’s ‘Bridge over a Pond of Water Lilies’ and submerged a road cone and two shopping trolleys into the water.

When Sotheby’s auctioned the piece, the three highest bidders were invited to sit on the shopping trolley chairs I’d made. I’d decided just to rent them and following the exhibition, lots of art dealers asked to buy them. In the end, Banksy’s team came and collected them. ‘We can’t have anyone else owning these, we’d like to buy them,’ they told me. They paid nine grand for the chairs and they’re now in one of Banksy’s galleries in Spain. They only took half a day each to make so it wasn’t a bad paycheck for a couple of days labor. I did treat myself to a little fancy dinner that night.”

If you fancy learning the tricks of the trade, you can meet Max in his double-decker bus for a few tips.

“I’ve got a double-decker bus that I travel around in, teaching people and hopefully inspiring people to get creative,” he says.

“One hundred percent of people board that bus saying, ‘I can’t use tools, I don’t make things, I’m not creative.’ Every single one of them, without fail leaves feeling so excited that they’ve opened the door to Narnia.”

SET YOURSELF UP FOR FINANCIAL FITNESS IN 2022