Can you really alter your fiber types?

We all like to think that if we train hard enough, we can excel at any sport we put our mind to. But in reality, some people do have a genetic advantage before they even start training.

Slow-twitch fibers can work for longer periods of time without running out of energy. They use oxygen to generate adenosine triphosphate so that they can perform slower, sustained movements like long- distance running or cycling.

Fast-twitch fibers are often thought to be stronger than slow-twitch fibers, but that’s not the case. They actually produce the same amount of force, but they fire more rapidly. This makes them best for generating short, sharp bursts of strength and speed.

There can be further categories between Type IIa, which uses both anaerobic and aerobic metabolism to create
energy and type IIb, that use anaerobic energy only. Type IIb is the fastest firing muscle fiber, but it also fatigues faster than any other.

What kind of muscle fibers do you have?

The average person tends to have a 50/50 split of fast and slow-twitch fibers in their muscles that are used for movement. It’s hard to know definitively how much of each fiber you have, but you can use this test to determine if you lean further towards one way or another. 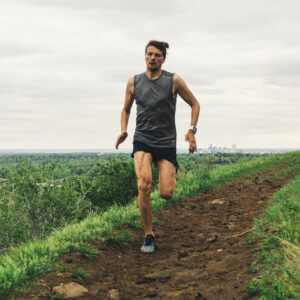 1. Choose a classic strength exercise – like bench press or back squat
2. Load the weight to 80% of your 1 rep max
3. Complete as many reps as you can until failure, or you lose your form

What determines which kind of muscle fibers you have?

ACE gives your body the instructions to make a protein called angiotensin-converting enzyme, which converts a hormone called angiotensin I to another form called angiotensin II that helps control blood pressure and skeletal muscle function. There are three variants of this gene: II, DD and ID. The DD pattern is associated with having a higher ratio of fast-twitch to slow-twitch muscle fibers.

Can you train your body to produce more fast or slow-twitch muscle fibers?

Whilst you’re not likely to be able to push your body to become significantly more fast or slow-twitch dominant, you can train your muscle fibers to be more efficient with the right exercise program.

Want to dig deeper into the science behind your gainz? Check out this fascinating article on VOLUME OR INTENSITY?

HOW THE ENTERTAINMENT INDUSTRY IS KEEPING DEATH ALIVE