When a recurring ankle injury put a stop to Brad Henke’s career in the NFL, he SEIZED the opportunity to explore an intrigue for performance that had been impossible to pursue during rigorous college try-outs.

Never one to shy away from a challenge, Brad recently accepted the part of Tom Cullen in the 2020 remake of Stephen King’s TV series The Stand. Practically self-isolating in order to accurately assume the role of a man living amidst a global pandemic, he astonishingly found himself walking into the exact same scenario when filming wrapped, but this time for real.

“I stopped trying out for the NFL in 1993,” says Brad. “Two ankle reconstructions left me with arthritis and I could no longer outrun the competition. I went eight years without training, I no longer felt as if I had a physical purpose and struggled to adapt.”

“I will never forget the day I saw a woman out-squatting me. As I tried to match her, I pushed and pushed until I woke up the next day with a hernia!” 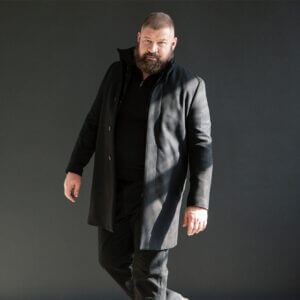 In a bid to regain a sense of self-worth, Brad attended an audition for a TV commercial.

“I’d always wanted to give acting a try, but there was just no time when I was playing high-level football,” he says. “Word got around they were scouting for football players as background actors in a TV commercial, so I thought ‘why not?’ and decided to poke my head in the door.

“I met some really creative people and was invited to attend acting classes and that’s when my outlook on life changed. In the first class, I witnessed a man cry. I remember being completely dumbstruck by his ability to conjure up these emotions from nowhere. I asked myself ‘how he could possibly achieve that. What made him feel that way? Was he using a special technique?’

“As a relatively ‘normal’ red-blooded male, I, up until this day, regularly experienced three emotions. They were: ‘I’m hungry’, ‘I’m angry’, ‘I wanna have sex’.

“These were the only emotions I could truly relate to. I started attending the acting classes five nights a week and soon acquired the ability to think and ‘act’ beyond these three basic emotions. My first audition was for a movie called Space Jam starring Michael Jordan. I only had a small role, but I knew my football career was never meant to be and that acting was my calling in life. Performance had become everything to me.”

Regularly cast in ‘dad bod’ roles, Brad remained pretty sedentary, staying out of the gym and focusing purely on the psyche of moulding into character.

“I cannot describe how bizarre it was to have been filming about a global pandemic for months and then walking into it for real.” 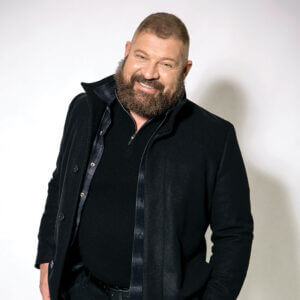 “I think it had been eight years by the time I finally made the decision to work out again,” he says. “I will never forget the day I saw a woman out-squatting me. As I tried to match her, I pushed and pushed until I woke up the next day with a hernia! I learned my lesson, that’s for sure!

“As a slow and sensible approach, I joined LA Fitness and started going to classes. I did step-up with abs and yoga to begin with, then I got myself a PT and started lifting weights. Whilst my rotund physique had served me pretty well in the audition room, I knew it was time to take charge of my health and I haven’t looked back since.”

Having regained a penchant for exercise, Brad now cycles along the coast from his LA home each morning and enjoys practicing boxing and Jiu-Jitsu.

“I feel so much better,” he says. “I’d actually say I’m in better shape now than I was twenty years ago. Stretching is particularly important to me and when I’m flexible

“I feel as if my muscles look longer and leaner. I really enjoy Jiu-Jitsu and think it’s something everyone should try at least once. It empowers a person of any size to use incredible force they didn’t know they possessed. It’s such a clever sport and great fun.”

“I’d actually say I’m in better shape now than I was twenty years ago.”


If he’s on set, Brad typically uses meal prep companies and swerves junk food served up at the cast canteen.

“Usually, I’m not filming seven days a week but on work days I don’t always get to train,” he says. “The likes of Mark Wahlberg will wake up at 4am to hit the gym, but I’m a night owl and could never do that! I’m more creative late at night and unless I have to, I won’t get up at the crack of dawn. When I was filming ‘Orange Is the New Black’ I’d have weeks when I was busy filming and others I wasn’t needed at all, so I just worked my training around that. Now that I’m maintaining, I’m pretty relaxed about it.”

Brad’s most recent role presented ironic challenges no-one could ever have predicted.


“In October 2019, I flew to Vancouver to begin seven months filming a remake of Stephen King’s series ‘The Stand’. As one of the few survivors on earth after humanity is struck down by a pandemic. My character suffered a brain injury as a child and I wanted to portray this as accurately as possible. I had a friend in high school who suffered a blow to his head playing football. I will never forget the day he looked at me and said, ‘In here, still me’. It still makes me cry to this day. I tried to bring some of that to this role and I think about him all the time.”

Brad spent much of his time off set alone as a means of evoking the personality traits necessary to accurately represent his character, Tom.

“It was a large role and a very hard role, but I really enjoyed it,” he says.

Little did Brad know the challenge posed by isolation during filming was far from over. Whilst ‘The Stand’ has been described as ‘King’s apocalyptic vision of a world decimated by plague’, walking into the usually bustling airport lounge at Vancouver to return home to LA on March 12th, 2020, the devastated world Brad had endured for his art had now become his reality.

“There was literally nobody in the airport,” he says. “I cannot describe how bizarre it was to have been filming about a global pandemic for months and then walking into it for real. Lockdown life was something my character Tom had learned to adapt to, but now I would have to learn to survive a pandemic too.”

Back home in LA, Brad now hopes to help drive social change by taking on even more challenging roles in future.

“I’d really like to play someone with narrow political views who then comes to the realization we should all be entitled to equal human rights,” he says. “Comedy is equally as important to me and I love to get involved in fun projects, but right now, the world needs people to get a crucial message out and entertainment is a powerful way to do that.”

If you like your TV gritty, check out Charley Boorman’s latest adventures here.