What the hell is an NFT?

NFT. You’ve heard of it, but what exactly is it?

A non-FUNGIBLE token is a unit of data on a digital ledger called a blockchain, where each NFT can represent a unique digital item, and thus they are not interchangeable. NFTs can represent digital files such as art, audio, videos, items in video games, and other forms of creative work1.

Still baffled? Yup! So was I. In a bid to ascertain whether this latest financial craze is an intelligent future phenomenon or a flawed online fad, I reached out to Simon Peters, Cryptoasset analyst for multi-asset investment platform eToro.

“The simplest way to describe an NFT is that it’s simply a digital token that represents something completely unique,” says Simon. “The record of ownership is stored on a blockchain. They’re non-fungible, which means they represent something that can not be interchanged for assets of the same value- because it is unique. Bitcoin on the other hand is fungible, so it can be exchanged easily. The NFT is just a token on the blockchain to represent that asset.”

Digital artists are raking in millions minting works as NFTs. But what’s to stop me right-clicking and printing out their work for my wall, completely free of charge?

“To be honest there’s nothing stopping you from doing that,” says Simon. “Last week a piece by digital artist Beeple sold for $69m and as soon as the sale went through on Christy’s people were screenshotting the picture and boasting on Twitter that they got it for free. But even though the artwork is digital, it’s the fact you know you own the original. You could print out the Mona Lisa but you wouldn’t own the original- that’s hanging in a gallery. We’re becoming a more and more digital world and there’s something about owning something original in that world that’s cool and perceived as being of great value in the future.”

Okay, got it. But I realized the value in hanging that oil painting on my wall; the Mona Lisa, delicately and lovingly created by Leonardo da Vinci over 500 years ago. The Mona Lisa, though, is displayed at the Louvre and now has an estimated value of over $660 million” 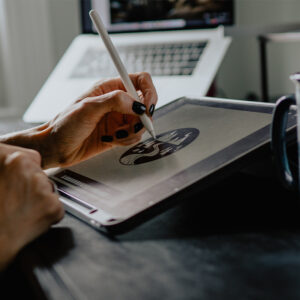 No offense, but talented as he may be, I still couldn’t fathom how or why a series of colorful computerized pictures created and uploaded by a man and his mouse could be considered a comparable long- term investment. Furthermore, prior to his record-smashing success story, the most Mike Winkelmann, aka Beeple, had ever sold a print for was $100. I questioned the perceived value of the art itself and whether this was perhaps elevated exponentially thanks to the appeal of owning one of the first Christie’s NFTs.

It’s not just the baffle of the Beeple for me though. Twitter CEO Jack Dorsey took it one stage further and sold his very first tweet, which read, “just setting up my twttr,” for $2.9m. How can you possibly ‘own’ a tweet? And more importantly, why would you want to own a tweet?

“It’s the NFT you’re owning,” says Simon. “Twitter was arguably the first platform to enable you to communicate with celebrities first hand. You could just tweet them directly and that was revolutionary. Owning the first tweet from that platform could be very valuable in the future and even increase in value. Once you purchase an NFT, your ownership gets held on a public ledger known as a blockchain. You don’t have to disclose your name publicly when you buy an NFT, but it’s really just a case of knowing you’re the owner and being able to tell other people you own it.”

So, is an NFT merely a ‘my balls are bigger than yours’ type purchase perhaps? Or could it represent something that could generate a handsome return when you come to sell?

“In the future, there may be potential to receive royalties from an NFT, for example, if you own a video you could receive royalties every time it gets played,” says Mike. “With crypto having had such a good run of late, people are looking to offset some of the gains they’ve made in this bull market and they’re looking at NFTs as the next big thing and getting in early.

“At the moment, NFTs are getting a lot of attention due to the digital aspect. People are trying to wrap their heads around how or why someone would spend $69m on a digital piece of art. You could easily create a token that’s linked to a physical property though, or a piece of fine art or a classic car and those would be held and traded on a blockchain. The land registry which details ownership of properties in the UK could be held on a blockchain. There’s no reason why not. The fees would be lower because it would remove the need for human liaison.”

Now we were getting somewhere. Storing ‘real world’ purchases on a digital blockchain enabling them to be bought and sold quickly and smoothly seemed completely logical. But what about good old-fashioned Fiat currency? Would I still be able to spend my tooth fairy money?

“Even though the artwork is digital, it’s the fact you know you own the original. You could print out the Mona Lisa but you wouldn’t own the original- that’s hanging in a gallery” 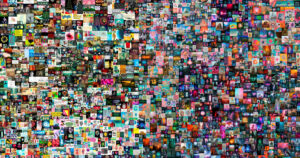 “You can only purchase an NFT using crypto, not traditional currency,” says Simon. “Ethereum is the main one. You just buy the crypto, then connect your wallet to a marketplace which allows you to buy and sell NFTs. You could use a stablecoin that connects it to a Fiat currency, but you need to use cryptocurrency to make the purchase.

“You can go to eToro, buy some Ethereum, send that to your wallet and then purchase an NFT quite easily.”

All very well, but how could all of this potentially impact the global economy?

“We’ve seen how economies have changed over centuries,” says Simon. “This emerging world of NFTs and smart contracts could make a lot of long and costly processes like buying a house far smoother.

“Utilizing a smart contract can happen automatically. This will create a more efficient society going forward and will inevitably create a shift in jobs. There will be jobs, but not the same jobs we see today.

“The first real NFT was seen in 2017. We had CryptoPunks and CryptoKitties. CryptoKitties for example enabled you to look after, feed, and grow the kitty and then sell it. Some were trading for around $100,000 at the time. It all started in that way as perhaps more of a fun thing to do, but what we’re seeing with NFTs now will change again in 5-10 years and become about tokenization of real assets in the real world and being able to trade them on the blockchain- that’s where I see NFTs going.”

With two different variables to consider; the fluctuating price of Ethereum (or said cryptocurrency) and the price of the NFT, often bought at auction, the market volatility of just about any NFT seemed to me to pose a great risk.

“You do need to factor in the fact the NFT may appreciate from a cryptocurrency point of view in terms of what someone is willing to buy, but you could also see a decrease in the dollar value of Ethereum by the time you come to sell it and you could be at a negative gain in that respect,’ says Simon. “That said, you could still have more Ethereum compared to when you bought it. It’s a space that’s rapidly changing, along with the prices. If you feel that cryptocurrency will appreciate in the long run, you may want to hold onto it for a longer period of time.”

“NFTs are getting a lot of attention at the moment and some are definitely more valuable than others,” says Simon. “People are trying to capitalize on the craze. They’re well within their rights to but I think over time this space will mature and I think NFTs will be attached to more meaningful things. Anyone can create an NFT about anything. A guy recorded himself passing wind and sold it as an NFT. I think it sold for $85.”

Blimey! A lot of hot air indeed! Get your thinking caps on, then buy and sell here before the value of your creativity depreciates.